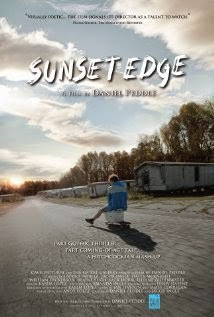 The story of four kids drifting around an abandon and decaying trailer park mixes with the story of young man haunted by discoveries made in the wake of his father's passing.

Great looking film with a great young cast is saddled with promotional material that promises much more than it delivers, Actually what it promises is something other than what the film is. The press material and poster talks about Hitchcock and horror and what you really have is a moody coming of age story. I kept waiting for some grand thriller to kick in and it never did, this is really just a drama that plays out in some intriguing ways. I should point out, and long time readers of Unseen will know, that I have run across any number of teen angst films. Film festivals like Tribeca are full of them and sometimes they work and some times they crash and burn. The one's that work either do something different or make it feel like we're sitting with the characters just hanging out. SUNSET EDGE has that feeling of just hanging out with these kids on a lazy afternoon. Gorgeously shot the film puts us into the head space and mind space of these kids. We are in the trailer park hanging with these kids.

Some where about a half hour in and we get the story of a young man dealing with the death of his father and the discoveries he makes when going  through his things. I suspect that this is where the Hitchcock references come from. While the sequences do generate some suspense they are not even close to Hitchcockian in their construction. Frankly I think referring to the film that way does it a disservice since you'll be waiting for something that never really comes. For me this is a moody little coming of age story. Its got a great feel to it. To be certain the film is very deliberately constructed and paced which will require patience from the audience. (Selling it as a thriller isn't going to get the right audience into the theater) but if one is going to go with it one is very likely going to be richly rewarded.

I for one am looking forward to what director Daniel Peddle and his cinematographer Karim Lopez do next.