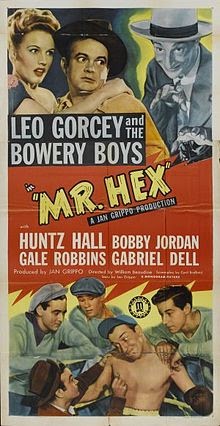 Fifth in the actual Bowery Boys film series (The series was the last incarnation of a series of film that began with the film DEAD END and ran for close to 100 films total) MR HEX is an amusing distraction with plenty of smiles and lots of laughs.

The plot of the film has the gang trying to get money to help their friend Gloria. She needs $2500. Slip spots a boxing contest in the paper which has a $2500 prize and bemoans that it would be perfect if someone could box. Somehow the idea of how people can be strong under hypnotism and they think that would be a great idea…just as a well-known hypnotist walks into Louie’s. Slip talks the hypnotist into teaching him hypnotism with the idea that Sach would become their unstoppable fighter. It all works fine for a while until some gangsters see a way of using a ringer to make some money…

At the point that this film was made the Bowery Boys series was still trying to work out the balance of comedy and drama. The previous four entries in the series were still copying the East Side Kids mixing of the two genres, here things slide all the way into the comedy realm. Yes there is some seriousness, as the bad guys try to take advantage of Gloria and in the closing moments they try to kill Gabe, but most of this is played strictly for laughs as Sach’s normal weakness is played off against his strength under hypnotism.

This is an amusing trifle. While far from the best of the Bowery Boys films its equally far from the worst as well. I’d put it somewhere in the middle of the 48 BB films. The film is an amusing diversion , which is what it was designed to be. The films were never meant to be high art just laugh producers and that’s what this film is, it’s a film that produces lots of laughs (or if not laughs chuckles) and many more smiles. This is 70 minutes with good people which ultimately is all we need.

Recommended, as most of the films in the series are, for those needing a mental vacation.