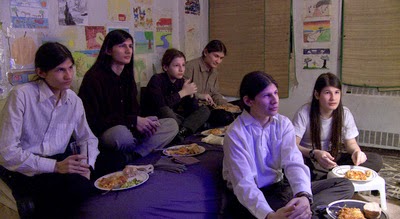 The pre-Tribeca press screening for WOLFPACK was packed. It was one of the fullest screenings I've ever attended. The crowd was the result of rapturous word out of Sundance where it was a darling and made headlines when it was picked up by Magnolia.

The film is the the story of the Angulo kids. The family grew up in an apartment on the Lower East Side of New York. They were home schooled and grew up on a diet of rock and roll and movies....and they never left their apartment ever.  That all changed when the one of the boys had enough and walked out one day... One day when he was out with his brothers he ran into director Crystal Moselle and the result of the meeting was this film

I'm having trouble determining why the film has gotten the big time love it had at Sundance.  At times a sad troubling story the film bobbles things as details are not given, time frames are nonexistent, threads are not pursued, the boys father, a key figure, remains a cipher and there is a general feeling that some events (trips to Coney Island or the movies)  feel staged. A police raid on their apartment- someone thought all their home made guns were real- is mentioned after the fact and it rattles around for a couple of minutes and then is done- like so much in the film.

I don't know what I think of this film. The central tale is intriguing but the film messes things up so badly that you don't care. Worse everything feels stretched by longish sequences watching the Angulo kids recreating the movies they love and video footage of the kids growing up which is not explained and randomly inserted. A half an hour in I was ready to walk out because I felt the film didn't have much to add- and it didn't.

To be honest I suspect that the film might have sustained interest if the film had made some effort to differentiate between the brothers- or even to put the boys names into our heads. Yes they are all named in Sanskrit but thanks to genetics all the boys look exactly the same, with the result by the time they start to leave the nest we really have no idea who the hell they are. Had the film made the boy individuals instead of a pack I would have better connected with the film.

This might have been something a half an hour shorter and with better editing, but as it stands now it a gawd awful mess.

(ADDENDUM: I feel I should point out that during several of the press screenings I attended there was discussions among some of the critics which pondered how much of the film was actual reporting and how much was done purely for the camera. Apparently there were some questions raised somewhere about the veracity of it all. I have not had the time to investigate that line of questioning myself but I raise it as a potential issue for anyone seeing the film)
Posted by Steve Kopian at May 03, 2015