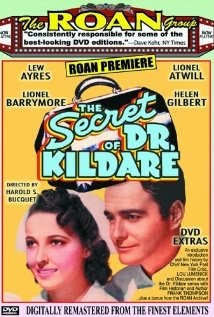 Return with us now to Blair Hospital where Dr Kildare and Dr Gillespie practice medicine...

This time out the plate is full as Kildare and Gillespie get involved with the case of a socialite who has a case of hysterical blindness. Meanwhile both of Kidare's fathers (Gillespie and Kildare's father) are showing signs of wear and tear.

The joy of the series is not the plots it's the characters and their interplay. Watching Kildare, Gillespie and the the others all crack-wise and care for each other. As Leonard Maltin said his write up on the series this is probably the series with the largest cast of regular characters. Even three films in I can't argue since not only do we get Kildare and Gillespie, but Mary Lamont, the nurses, the other interns, the telephone operator, the Nat Pendleton ambulance driver, Kildare's parents and a few others. What sets them apart from other series is that from the beginning they are all well rounded. Yes to be certain there is a touch of cliche, but each character has something beyond that sets them apart.  Also wonderful are the characters and patients that come and go.

This third film in the series is really good. As with many of the films it's a bit soapy and convoluted but at the same time it moves like the wind. At the same time the film's flaw is that it sets in motion so many plot threads it can't keep them all in the air, and several of them seem rushed.  Its not bad but but it kind of makes you wish it ran longer than it's 84 minutes
Posted by Steve Kopian at May 25, 2015