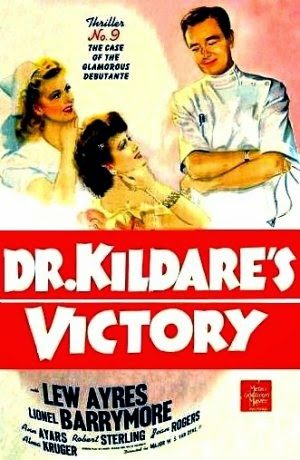 Stick a fork in it boys and girls the Kildare series is done.

The longest entry in the series is the least with the plot not kicking in for twenty minutes. It does act as a kind of sent up for the Dr Gillespie series, but as a Kildare series entry its rather weak.

The main thrust of the film has the repercussions of an intern taking in a patient from outside of Blair generals it's designated area. The hospital who's territory the patient was in gets angry.

Lots of sound and fury and shuffling of the cast signifying nothing. Everyone is running about and plot lines are thrown up and followed but it all feels halfhearted. Somewhere along the line some one decided if they had a lot of things going on it would cover that they don't have much of a plot or anything for Kildare to do.

For me this was a major disappointment. I started going through the Warner Archive DVDs not long after I got them and I tore through them. I loved the series and all of the characters. When I hit the previous film in the series, DR KILDARE'S WEDDING DAY I stopped when it was done. I needed to pause after the events of that film, and I needed to pause because the series seemed done at that point. Weeks passed before I picked up the last film...

...sadly it wasnt worth the wait. I should have left the series with the last one.

This isn't a bad film, its just not up to the previous entries. Its seems to exist more to fill a quota the to tell a story. I don't need to see this one again....and if I hadn't spent the last eight days writing up the films I would never have mentioned this one here at Unseen.

DO buy the Warner set, and do watch all the other films, however you may  wnt to skip this one.
Posted by Steve Kopian at May 31, 2015