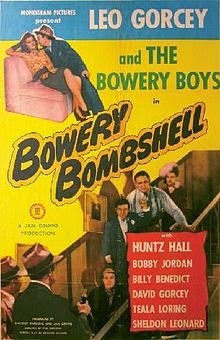 Wanting to help Louie raise $300, the boys decide to sell their car. While it's parked outside of a bank a friend of the boys shows up and takes Sach's picture-just as robbers come out of the bank. Hoping for a reward the boys go to get a copy of the picture only to see it in the paper promising a $1000 reward for Sach's arrest

This is the first of the Bowery Boys films that actually feels like a Bowery Boys film BOWERY BOMBSHELL is a great deal of fun. Here at last are all the guys doing things and behaving in ways that would become more cemented down the road. The film is both very funny and rather suspenseful since we can't be sure how the boys will save Sach.

I really like this film a great deal, Its one I would definitely choose to watch again and not, like some of the later films, watch them when I ran across them on Turner Classics or when I just happened to have the DVD in the machine.

While I know some of the films that followed this would be up and down, this is the first of the series where the Bowery Boys as we know it finally took shape and as a such is to be treasured.
Posted by Steve Kopian at May 06, 2015