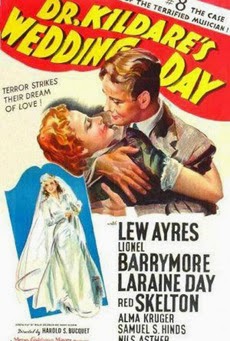 As the big day approaches the hospital prepares for the wedding of Dr Kildare to nurse Mary Lamont.  With the hospital all in a tizzy Dr Gillespie takes on the case of great conductor who is losing his hearing.

One of the more serious entries in the series is also one of the darkest. This is not a happy film since it marks the departure of Lorraine Day (nurse Lamont) from the series in dramatic and heartbreaking fashion. A pall hangs over the proceedings and you can feel it from the opening even if you don't know where it's all heading.

More a Gillespie movie than a Kildare one Kildare is barely in it for most of the first half of the film, And even in the second which has tragedy strike, Kildare is only in the scenes where he's really required. I completely understand why this is, to follow Kildare would have made the film almost unbearably dark.The darkness is not what the film is about, its more about over coming problems the conductor hearing and Kildare's loss.

This is a solid entry in the series, and worth seeing especially if you've been following along with the series, but I'm not sure you'll want to revisit the sadness a second or third time.
Posted by Steve Kopian at May 30, 2015