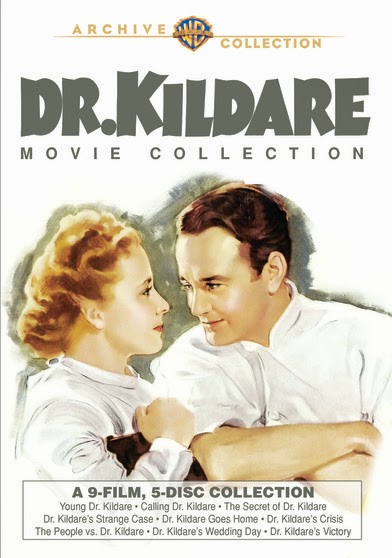 I would call it a purchase after a drunken binge but I don’t drink. Actually what happened as I was purchasing a whole bunch of movies from the Warner Archive and decided to toss the Dr Kildare collection into the mix. I had always heard the series was good and the chance to get all of the films for a relatively small amount of money I said what the hell and used the last of my Christmas money for it.

Hunkering down over a few nights in snowy January I was pleasantly surprised to find the films actually quite good. Even good enough that I’m planning on revisiting the films again down the road.

Over the next few days I’m going to take a look at all of the films in the series.

Young Dr Kildare opens with Kildare returning home after graduating and passing all of his tests. Everyone thinks --- is going to join his dad in the family practice, but he is uncertain that’s what he wants. With a heavy heart he tells his mom and dad that he’s going to New York to intern at the city’s biggest and most prestigious hospital.

At the hospital Kildare crashes head long into Dr Gillespie (Lionel Barrymore) the chief diagnostician. Unafraid and willing to spar with the old man Gillespie begins to take a shine to Kildare. During Kildare’s rounds through the hospital he is assigned to ride the ambulance on various calls. During one he is called to a suicide, however the woman isn’t dead and Kildare revives her. Back at the hospital the young woman, an heiress, is thought to be psychopathic, however Kildare, based on his observations feels otherwise. While he battles to do the right thing for the girl the forces in the hospital martial against him.

While not the first film to feature Max Brand’s character its clear why this film spawned a long running series. Say what you will about the MGM touch at making films, they managed to cast some great roles perfectly to the point that even if the film hadn’t ended with announcement of more films, You’d suspect that the public would be writing letters for more stories. When I ended the first film the first night I was ready to keep going through the series despite the fact that I finished up well after midnight on a school night.