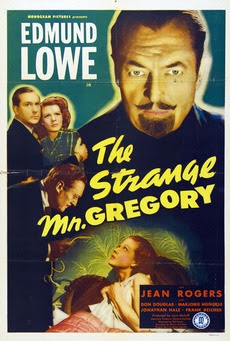 I know you’re asking yourself if it’s almost good why am I writing it up? Simply because it stars Edmund Lowe and as such the film remains watchable.

The plot of the film has a Lowe playing Gregory, a great magician who experiments with mind over body control. He is impervious to pain and he is experimenting with a death like trance. All is going well until Lowe meets the wife of a local magician in a town he is performing in. Smitten he decides he must have her. The trouble is he doesn’t know the niceties and murder and death result.

While Lowe is in the film, most of the first half and less in the second the film remains compelling. Talk about your force of personality, Lowe has it in spades. Just watching him sit and read is strangely compelling. You want him to be on screen the whole time. Unfortunately he isn’t

The trouble with the film is twofold first anyone other than Lowe are dish towels and incredibly boring to watch. Their scenes come off as bad soap opera, which it is. The other problem is that the film makes no sense. Why does anyone do what they do? Beats the snot out of me. I mean really, Gregory feigns death appears as his brother, kills people for no reason. It makes no sense. Actually it’s a jumbled mess.

And yet watching it you gain this appreciation for Lowe because he alone keeps you watching.

Is it worth seeing? If TCM runs it and you don’t have to pay for it but other wise probably not- unless you want to see how one person can make a bad movie watchable.
Posted by Steve Kopian at May 13, 2015