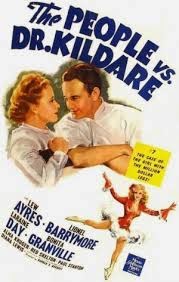 When Kildare and Lamont run across a car accident, uncertain about when the ambulance will come Kildare is forced to operate in the field. When the patient, a star in the ice show,  end up with a paralyzed leg she sues Kildare, the hospital and subpoenas pretty much everyone in the cast.

After the bump in the series that was DR KILDARE"S CRISIS the series gets back on track with a great entry that's part medical drama, part soap opera part mystery and part star gazing exercise. What cause the girl to be paralyzed is at the heart of the film, clearly it wasn't Kildare, but the quest is what keeps you hanging on edge.

The unexpected joy of the film is watching all of the stars, future and past who criss cross the film. Tom Conway as the defense attorney, Bonita Granville is the skater, Red Skelton is an orderly, and Dwight Frye shows up as the foreman of the jury. Its a blast to see the star power added to an already stellar cast of regulars.

I really liked this film a great deal. I'm certain that the film will stand on it's own, but if you're a fan of the series and have been watching them all along the film turns into an even bigger ball of fun. One of my most favorites of the whole series.
Posted by Steve Kopian at May 29, 2015