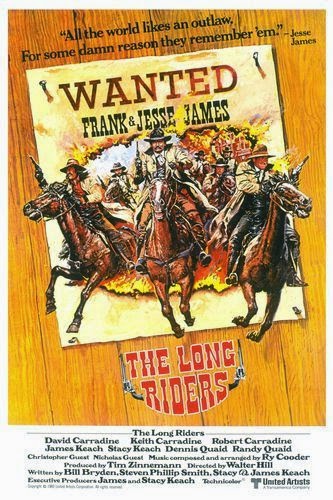 The Long Riders is Walter Hill’s retelling of the story of Jesse James using the conceit of all the various brothers are played by brothers. Stacey and James Keach are the James brother, The Carradines (David, Keith and Robert) are the Youngers and the Quaids(Dennis and Randy) are the Fords. There are also numerous western veterans floating around as well.

To be honest the film on the face of it isn’t anything new. Sure it has the realism that was creeping into films during the period, but if you really look at it the film isn’t all that remarkable. On the other hand it is damn entertaining because there is something about the casting that makes the film come alive. Knowing the actors are brothers adds to it all and gives the scenes between them a great deal of weight.

Interestingly this was the moment, and it’s a tangible moment, where Dennis Quaid eclipsed his brother as a Hollywood star. Seriously, this is the moment where minor star Dennis steals the spotlight from Randy who was the big name at the time. Watch their sequences together, watch how Randy is almost a non-entity and how the camera loves Dennis. Outside of the Vacation films Randy would never really shine again.

The other thing this film has is Ry Cooder’s score. It’s amazing and back in the day it was never far from my record player. I have whole passages of the score memorized. The opening bit is one of the best opening musical moments I’ve ever experienced.

Should you see the film? Even considering the novelty of the brothers, yes. This is a good western, to be certain that the brothers make it memorable, but even so its still a good time passer.