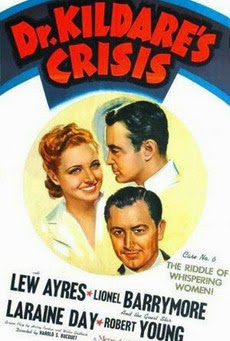 Sixth film in the MGM series has Dr Kildare reconsidering marrying nurse Lamont. It seems her brother is showing signs of epilepsy and if they get married it might prove disastrous for their children.

Okay entry in the series is more soap than anything else. This is the first time in the series where it really feels like it's just passing time. I'm sure that had I not been going through the series in a relatively short amount of time this may have played better, but as something in the middle of a series its a weak link. This isn't to say it's a bad film,rather its just not up to some of the other films in the series, Even on its own terms its worth seeing.

The plot line concerning the fear of epilepsy now seems quaint. While its now seem ludicrous you have to remember that in 1940 people feared genetic diseases.