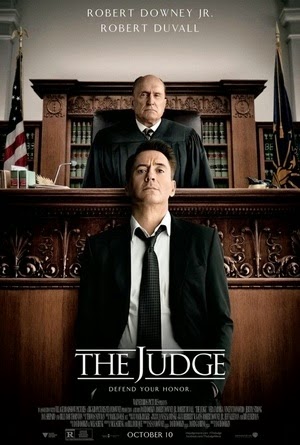 Robert Downey Jr plays a hot shot attorney who goes home for his mother's funeral and crashes head long into his family and friends. Things become complicated when Robert Duvall, Downey's dad, is accused of running over a man on a bicycle. Did he do it and was it intentional? Will the family heal as a result?

Cliche filled story somehow works way better than it has a right to with the result it turns into a really touching little film.

Is it high art?

Oh hell no. Frankly I have no clue why Robert Duvall got an Oscar nomination out of it.,

It is however wonderfully entertaining and moving. Yes its a great film where a family learns to come together. Its got great, if overly familiar characters, a compelling story and more than a smidgen of movie magic.

One thing I wish the advertising hadn't done, which is make the film seem like  mystery, it's not. Its not going to spoil anything if you know that Duvall did indeed kill the cyclist. That point doesn't matter since the plot isn't about that but rather the family. Any mystery is really about what exactly happened and why will be revealed when you see the film.

I like this film a great deal. If I have to quibble about anything is why the film is two hours and twenty minutes long, its twenty minutes to a half an hour too long and by the end I wanted to fast forward a bit.

Still this is definitely worth your time and popcorn curled up on a couch.
Posted by Steve Kopian at May 09, 2015