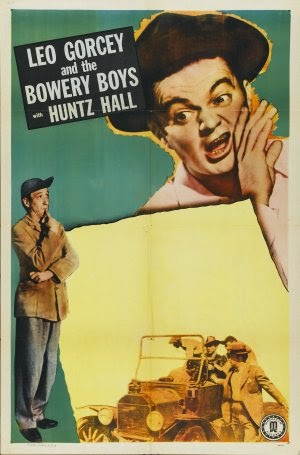 First of the official Bowery Boys series has Slip losing his job by punching his boss. His sister who works for the owner of the company is angry with him. He manages to get  another job working for the DA serving warrants and subpoenas. While on the job he meets Sach. He also discovers that all is not well with the construction firm he was working with and that his sister maybe in danger.

If you're familiar with the later films in the series this early entry plays rather strangely with Slip being pretty much on his own. Sach is not the character we know from the later films. Yes he provides the comic relief but his interaction with Slip are not as the buddy he's become. The boys also spend a great deal of time in suits and ties

The film is not really like the wild comedies that would follow. The film is a mix of comedy and drama. The film is tied to the earlier Eastside Kids films with its mix of the genres. The  rejiggering of the formula that came with the name  change isn't really set, that would take another three or four films to get down.

Taken on it's own terms LIVE WIRES is a pretty good B film. For me the problem is that I'm so used to seeing the later films, I'm not used to seeing Slip, Sach and the boys in such a mix of comedy and drama. Yes the earlier Eastside Kids did similar things, but those films didn't really keep the various characters apart, nor were they operating in the settings that signal what the series would become.

I like this film. Its a solid little film, Definitely worth a look, especially if you're like me and slowly going through all of the Bowery Boys films in the Warner Archive collections. (The film is the first film on the first DVD of the first collection)
Posted by Steve Kopian at May 04, 2015