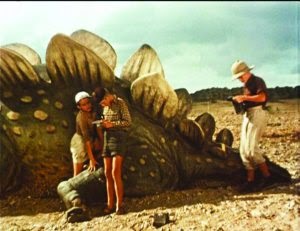 Odd ball strange film, kind of like Philip Jose Farmer's RIVER WORLD on acid but for kids concerns four friends who go into a cave via a river and up traveling back along the history of evolution seeing mammoths, wooly rhinos, cave men, dinosaurs and other strange beasts.

I have no idea what to think of this film. The eight year old in me is thrilled to death at the possibility of this being real and the cheezy special effects that reveal really cool monsters....

On the other hand the adult me was kind of bored by the film since the kids rarely interacted with anything watching the animals from a distance....

...on the other hand every time some creature popped up, which is every couple of minutes my attention shot up.

Its pretty cool. It has good monsters if nothing else. It is also a good example of the cool things that they don't do any more. And what I mean by that is this is a film where the filmmakers don't talk down to the kids, they don't sugar coat anything- they have to fish for food and deal with elements. There are no adults around and no wacky side kicks. The danger is real-even if no one gets eaten.

Rare Films has a copy of it subtitled and it's worth checking out.