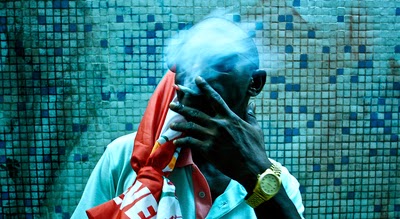 Entrepreneur from the Congo ends up stranded in China when a deal to have political t-shirts goes sideways and keeps him in China past the election.

Based on the lives of the actors the film is a mix of documentary and drama that is okay. Neither bad not exceptional the film just sort of is, something that is the result of its hybrid nature which really doesn't allow it to soar in the ways that wholly documentaries or wholly fiction films can.

Probably the most amazing thing about the film is that i have so little to say about it. Yes it looks good, yes the characters are interesting but the film just sort of was there on the screen not really something I could engage with.
Posted by Steve Kopian at May 01, 2015