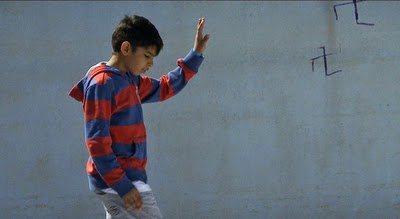 The film is a slice of live, you are there documentary about 10 year old Toto and his sisters who live with their drug addicted uncles in a really bad slum of Bucharest. Toto’s dad is gone. His mom is in prison for drug offenses. One of his sisters barely is at home and sleeps at friends’ houses to be away from the drugs and crime. Toto’s other sister is an addict herself. We watch as Toto finds hope in dance and what happens when his mother comes home.

When the film started I didn’t know if it was drama or documentary. The film has the feel of reality, its too bleak not to be, but the film looks like a drama with shot choices that only a drama director would use or could get. Additionally no one seems at all aware the camera is there.

I never clicked with the film either time I saw the film. Despite a long conversation with Nicole, the film’s festival publicist after the first time through, I still never connected on the second time. The people in the film remained too distant for me to connect to. The film is roughly half over before the dance portion of the film kicks in and the film begins to kind of find a direction.

The problem for me the film is too observational. I get the sense of these people’s lives off screen but at the same time we’re only seeing flashes of those lives. We get moments and not a sense of the lives a whole. I was left wanting to know more. As I said I spoke with the publicist after the film she filled me in on a good many points that she got from the director. Its all well and good that her questions could be answered, hell they answered some of mine, but shouldn’t all of that been on the screen? This is real life and not a drama where we are supposed to puzzle it out for ourselves.

And I freely admit that one of the reasons I don’t like the film is that it feels exactly like the East European art films that I hate. Not to put too fine a point on it seems exactly like some of the bleak Romanian films that were all the rage here in the US for a while- dark little confections with an intellectual bend that crushed the soul. The feel of these films kept me away from most of the country’s output because that was what I was being offered (it took the last Romanian Film Festival at Lincoln Center to change my mind about the country's cinematic output).

The choice to see this bleak little film is up to you. For me I don’t need to go there again
Posted by Steve Kopian at May 02, 2015