My take on the review-proof Human Centipede 3:Final Sequence (2015) 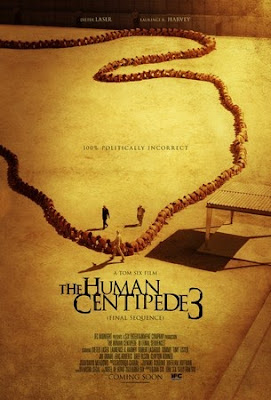 Please sir, think of the outrageous medical costs - flunky to psychotic Bill Boss warden of the prison in Human Centipede 3

This film is review proof.

What ever I say will mean nothing because anyone who wants to see it will do so purely based on the title. No one is going to care about the reviews because the film was doomed to get bad reviews.

The film begins with a met-moment like the second film with Bill Boss, warden at a prison in the American Southwest turning off the end of the second film. From there we get Boss screaming and yelling obscene and very politically incorrect things while torturing the inmates ending up with the title made out of most of the surviving ones.

I could say a great many snarky things, but what's the point, everyone will be saying them. I'm just going to tell you why its a bad film and leave it at that.Maybe that way you'll listen to me.

The first thing I have to do is ask 1 hour 43 minutes? This film is 1 hour and 43 minutes? Why? Why is this film so long? Its not like the film is inventing the wheel, its simply rehashing nonsense from the first two films and adding in more torture porn tropes. There is no reason for this film to be as long as it is since it runs out of steam early on, picks up momentarily in the second half when the centipede is revealed only to crash again when we realize it was done better before in both of the earlier films.

Yes that is a kind word about the first film. Shit happens and when you're comparing the films in this series you have to say when things work.

Sadly the film isn't really that offensive. yes some vulgar things are said about  women, ethnic groups and anything you can think of; and the film also has some offensive things happen especially against women, but it's so knowingly done  that while it will offend the offense is lessened because its so calculating that only a moron would denounce it because only a moron would believe the film makers were serious. Ultimately this film sucks and if they didn't make it offensive no one would talk about it.

Worse still is what passes for humor, its not funny, it's just stupid. Its a bold attempt at making humor of the lowest kind, but some how in droppin a rock off the comedy cliff into the chasm of stupid jokes they missed it completely. How that happened is beyond me, I mean all they had to do was drop it straight down, but somehow they did.

The biggest problem with the film is Dieter Laser, the mad doctor from the first film, and who plays Bill Boss in this one. In a word he sucks. All he does is scream and yell and act like an ass. If he wasn't so over the top the film might have worked, but he's just so balls to to the wall nuts as to be completely unbelievable even in this films own twisted world. Five minutes in I wanted to tell him to shut up. Ten minutes in I was done since he was so one note that there was no point.

I really dislike the first film. I begrudgingly like the second. This film isn't even worth the time to consider.

Watching the film I was reminded of other torture porn that I both liked and disliked and pretty much anything that was like this, where the humor mixes with the horror, say BLOOD SUCKING FREAKS, was light years better. I mean even the worst of those films had something that made me want to rant about them and say why they shouldn't be seen. This film is so calculating and so one note that had I not agreed to review this film I would have walked away and said nothing..(actually I should have just said forget it and left it at that).

Take my advice, save your money. Don't see the film, its not worth it.

(And to the small group of you who will like the film- good for you. I'm happy. But before you tell me I'm missing the point, tat I don't get what it's doing or trying to do. I do get it, I just think it does it badly. Feel free to go binge watch this repeatedly as often as you like. I say that in the hope that that way you'll remain in your parents basement forever and never reproduce.- oops sorry I said I wasn't going to get snarky)

The film hits VOD and theaters Friday
Posted by Steve Kopian at May 19, 2015