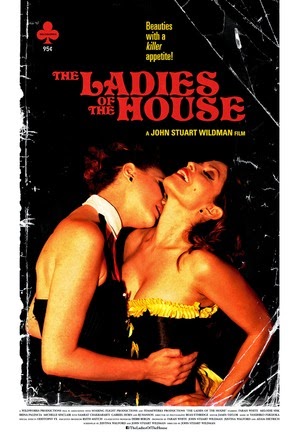 Before we start you need full disclosure- I know the director of Ladies of the House John Stuart Wildman. I have known John ever since I started covering the New York Film Festival back in 2010. He was the PR person for the Film Society of Lincoln Center and I’ve been running into him around film events or just trips to the movies for five years. I have had numerous conversations with him and I consider him one of the nicest people I know. I have known about his film for a couple of years now and I’ve wanted to see it ever since he invited me to a late night screening of the film about two years ago. I didn’t go to the screening and had to wait until the release on VOD last week

I know many people in the New York film critics circles who know John have worried about how they are going to review the film(they worried if a positive review would be seen as currying favor while a bad one will put them on John’s shit list) I'm not worried about that. I've simply reported my reaction to the film, so what follows is my honest opinion of the film- I genuinely like the film. I have not altered what I say I feel for the film in any way for any reason other than I didn't like what I wrote. If I did that then my word on everything else would be suspect. I always try to speak my mind.

John Stuart Wildman’s Ladies of the House is wild throw back to some of the schlocky horror films and TV series of the late 1980’s and early 1990’s. The press notes talk about how Wildman lifted ideas from Douglas Sirk, but the truth is the film is closer to things like the TV series Tales From the Darkside or Sorority Babes in the Slimeball Bowl-A-Rama in which Wildman starred back in 1988.

The plot of the film has two brothers and a friend going to a strip club for a birthday party. They follow one of the girls home and talk her into partying with them. When things go wrong with the more socially awkward member of the group, guns are drawn and the girl is shot. Before the guys can flee the girl’s roommates come home and things escalate as the girls hunt the guys wanting revenge and dinner…you see the girls are cannibals.

Wicked mix of humor and horror is a great deal of fun. The film is nicely retro with a seeming complete lack of CGI blood and guts which is a huge plus. I mean I enjoyed the hell out of watching a guy get gutted knowing that it was a really well done physical effects and not computer enhanced gore. As gruesome as it is the fact the props have weight just adds to the proceedings- I mean the way the skin ripples after being peeled back is a detail most films wouldn’t bother with.

Yea, I know that’s really sick, but some of the joys of the film are in the details. For example everyone talks about how the color scheme of the film is done is bright pastels, but no one really talks about how the color drains during some of the nightmarish sequences The bright colors become almost black and white. It’s a great psychological twist. It also gives an indication that had the film lost its humor and had been filmed entirely gritty the film quite possibly have been a complete white knuckle ride from start to finish. I would hate to have to sit through what John come up with on a full on balls to the wall, no mercy horror film.

The film is not without its flaws, largely doing with the budget which keeps some of the scenes looking like the aforementioned Tales From The Darkside. The film also feels so much like the films of the 80’s and 90’s that I suspect that some audience members are going to chaffe at the lack of slickness. While the feel of the film added a charm, some of the reviews I read were bothered by it. (That’s their loss since people should be able to take films on their own terms and not compare them to things they like)

Whether you like the film or not there is no getting around that the four ladies at the center of the film are dynamite. Farah White, Melodie Sisk and Brina Palencia are all wonderful and manage to move the plot along through force of personality. I do have to single out Michelle Sinclair better known as the adult film actress Belladonna as Ginger. Her performance is incredible and quickly short circuits any prejudice you might have about porn actresses playing it straight. Actually the real joy is that how she is here is completely different than she is in Paul Thomas Anderson’s Inherent Vice where she had a small role. Yea she makes an impression in that film but here she does more, she touches the heart as the wronged girl who's shooting cause a shit storm for everyone involved.

This is a solid horror film and it is most certainly worth a look for horror fans, especially with a love for low budget classics of old.

(I'm going to talk to John Wildman Thursday so look for a report soon after.)
Posted by Steve Kopian at May 05, 2015