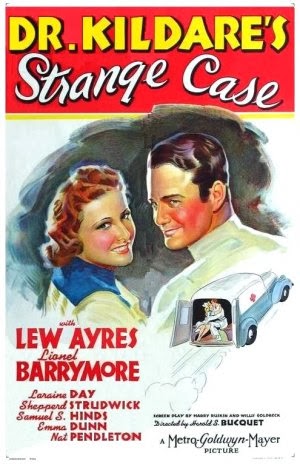 Fourth time out has Kildare battling with a brain surgeon, Dr Lane, for the affection of nurse Mary Lamont. The trouble is that Dr Lane has been losing a large number of his patients, so many that he's being called The Undertakers Friend. Thinks get complicated when a man is brought in with head injuries. He insists that Friday is the day. After the operation his mania increases and the hospital big wigs think the operation may have gone wrong. (The film carries over from the previous film, The Secret of Dr Kildare, with Kildare offered a job in an institute funded by Lionel Atwill's Paul Messenger for curing his daughter.)

Solid entry in the series cuts way back on the cast of characters (many are given token appearances) and plot complications for a straight forward, rather serious tale of Kildare trying to help a friend and rival, as well as trying to sort out his future. One of the things I like about the film is that for the first time the films really start to feel as though they are all connected. We have the questions about the Messenger institute, we have characters meeting each other with the notion that they had been referenced to each other outside the films.  I like that the Lamont/Kildare romance is moving along in a realistic manner.

I'm not sure how the film will play out for someone coming into the film without seeing the previous films, but as someone who is going through the films in order via the Warner Archive collection its a great deal of fun. High art? Hell no, but it does make me want to pull out the next DVD and keep going through the series.

On a technical end watch the scenes where Kildare and Gillespie have lunch and watch as the  glasses of milk keep refilling.
Posted by Steve Kopian at May 26, 2015