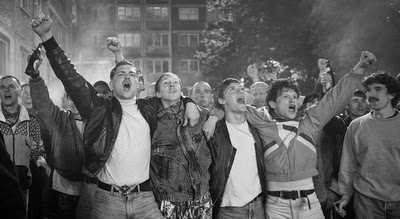 The complex 1992 anti immigrant riots in Rostock Germany are reduced to simple cliches in WE ARE YOUNG WE ARE STRONG. If you've seen any disenfranchised youth films, especially from Europe you've seen variations on this before.

Reducing a three day event down to a single day and giving almost no background (other than there is an intense dislike of the refugees flooding into the country) the film follows a Vietnamese woman living in the apartment block that is at the center of the riots, a politician who is not sure which way to stand on the explosive issue of immigration and the politician's son and his friends who seem to be for violence simply because its something to do.

Playing more like a melodrama then docudrama we watch as the various characters go through their day and have various crisis of belief. Their story arcs are nothing we haven't seen before as the immigrant is noble soul uncertain about staying in Germany or going home, the politician doesn't know if he should do the right thing or simply follow what his bosses say.and the the son goes along with his directionless friends but is unsure if its the right thing especially after a friend kills himself for no reason.

We've been down these roads before. We've seen these sort of characters before going all the way back to the 1950's teen angst films, the tropes of which are refashioned to cover a national crisis. The characters are constructs and not real people, their problems exist simply to get some sort of point across.

For me the biggest problem with the film is that the film really requires you to have some sort of knowledge of the events and German history to really work. Yes its about the rise of xenophobia in Germany and the potential return of fascism.but the climate in which it's operating was about 18 months after reunification of the country. That was a complicated time. There were economic factors that helped this to happen (the economy slid after it)- as did the German policy toward refugees which isn't explained.  The reunification is why several of the characters complain about the Stasi, the East German secret police trying to gain control. I kind of understand what was going on at the time but even so I felt this need more to work for an international audience.

its not a bad film but it is too simplistic for what it's trying to do.
Posted by Steve Kopian at May 01, 2015