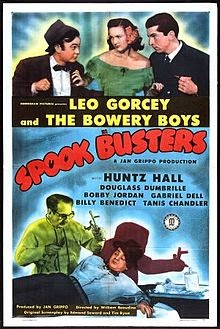 n the long history of the Bowery Boys/Dead End Kids/Little Tough Guys/ East Side Kids the boys have  repeatedly run in to situations in haunted houses. The encounters included two run ins with Bela Lugosi to varying effect. Once the series became the Bowery Boys the encounters became more frequent.

The first of the Bowery Boys encounters with supposed haunted houses and mad scientists was Spook Busters. Having graduated from extermination school the boys take on a job ridding a house of supposed ghosts. What is supposed to be ghosts turns out to be Douglas Dumbrille and his gang of mad scientists who are looking to do the old brain switch with a gorilla routine.

High on laughs but low on plot this is a very funny send up of all of the old dark house routines. I think they get pretty much all of them except a dark robed killer. They pretty much destroy them as well.

And speaking of routines I think this is the first times the boys shout out for one of their routines when Sach and Slip are trying to get past one of Dumbrille's henchmen.

The problem with the film is that after the first 15 minutes which set up the plot  and gets the boys to the haunted house the film effectively stops dead in its tracks for all of the haunted house send ups. Thats all well and good but its round and round nonsense for the better part of half an hour. The gags are funny but they don't lead anywhere, largely because we don't know what Dumbrille and his gang are really up to until the final 25 minutes At that point the film snaps back to life but at the same time our interest has been lessened.

Don't get me wrong the film does produce copious amounts of laughter and it is enjoyable, but the unfocused middle section makes the film very much a B film best viewed as part of a multiple movie night.