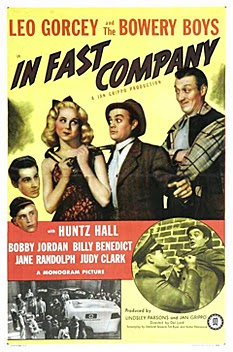 Second of the Bowery Boys series has the boys helping out an injured cab driver. Its seems someone wants to hone in on the cab business. Complicating things is Slip's jealous girlfriend.

More drama than comedy is to be found in this entry in the series.Its clear that the filmmakers still don't know how to handle the characters as events seem to happen to some and not others. At times some of the boys are on the outside looking in.

Taking the film on it's own terms this is a really good B crime film. The trouble is that the Bowery Boys have been dropped into it. That would be all well and good, more so if you are watching the film in it's second in the series spot, but seeing it after having seen other films in the series the film feels off. This isn't quite what I expect from the series-even though I knew what the film was like having read David Hayes and Brent Walker's book on the series.

Definitely worth a look though just keep in mind this is an early film in the Bowery Boys series.