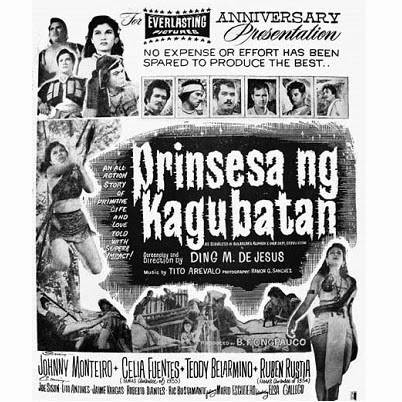 Only the characters in this story have been fictionalized-opening crawl

unique film from the Philippines had Spanish Conquistadors going to a small island of Mindoro in search of gold. The end up clashing with the island's inhabitants which include a female Tarzan type
A priest and one of the conquistadors is captured. And then things get messy

I am uncertain when this film was made. The usually right on target Sinister Cinema lists the film as having ben released in 1949, however the IMDB and other sources suggest 1956, either way the film is a trip. Its full of action, weird rites, scantily clad women, snakes and lots of soapy drama.

Apparently because of the somewhat minimal dialog (and probably a cheap ass distributor) the film was never dubbed or subtitled into English. The result is that things are not 100% clear in the story. Its not fatal but it makes it hard to judge if this is a good film or a bad one. Either way this is a must see for anyone who loves really off the beaten path films because the set pieces are truly amazing with the action sequences exciting, a rape and its aftermath truly terrifying and other sequences being unlike anything else you've ever seen. Truthfully the opening sequence where the conquistadors arrive looks amazing and rung true as the way they probably really would have come ashore.

Is this a great film. Probably not, but it is a really cool viewing experience. Worth tracking down (Sinister Cinema has it)
Posted by Steve Kopian at May 11, 2015