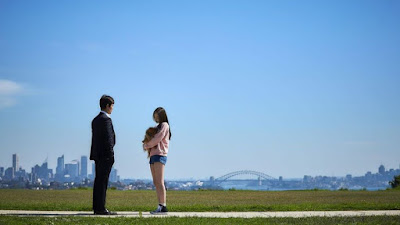 Lee Byung-hun is quite good as a stockbroker whose life goes upside down when an investment his firm had been pushing is revealed to be a scam ruining thousands. Packing up his stuff he heads to Australia where is wife and son have been living so the boy can get a better education.Filled with shame and regret he can't bring himself to let them know he is there. Making the acquaintance of a young girl he tries to sort out where he belongs.

Interesting meditation on regret is well acted moody drama. The performances are the best part of the film which frequently undercuts itself by insists it is deep and meaningful.

The trick with this film is going to be the final fifteen minutes where the film takes a turn, which will either thrill you or act as a game killer. Its not unexpected as such but at the same time it may change how you see the film- it changed mine (I screamed at the screen)

JB's different take on the film can be found here.
Posted by Steve Kopian at July 02, 2017