RAGE and THE TOOTH AND THE NAIL at NYAFF 2017 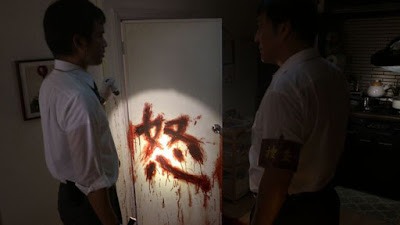 Lee Sang-il’s epic RAGE is a tale that spins out from the brutal murder of a couple in their home. As the police attempt to find the killer we get three seemingly unrelated stories that the murder tale will touch. The first is that of a single father who brings his daughter home after she had run off to work in the sex industry. She forms friendship with an outsider who has started to work for her dad. The second has a semi closeted man falling into a relationship with an unemployed and shy young man he meets in a bath house. The third tale is that of a young woman who moves to the coast and becomes interested in a wandering stranger who occasionally spends time on a deserted island.

The film is a good, but it is one that would have been much better if the stories had been not tied together. The murder tale is the weakest part of the story and while Sang-il uses it to explore his main (and least interesting) theme of the place of the outsider it really has nothing to do with any of the story lines other than to add an unnatural catalyst to the plotlines. You could do the same thing if the murder never happened. Sadly had Sang-il had not focused on the murder and chopped the stories apart and made them separate films we would have had two, maybe three of the best films of the year.

In all seriousness the gay love story is one of the best films at NYAFF and it may very well end up on my best of the year list. It’s a stunning carefully modulated tale of love and longing and it broke my heart in all the right ways. I desperately wanted to see more because the story is gloriously human and one that we can all relate to, whether gay or straight. I wanted to see more of their story because I was truly invested in the characters and their lives.

The father/daughter tale was also great. Ken Wantanabe is fantastic as a father who loves his unconventional daughter and wants to protect her as much as possible. It’s an other story that speaks of all humanity.  If it had been given more time they could have fleshed things out so we really got to know both the dad and the young lovers and really gotten weepie at the end. As it is it's a killer tale that moved me.

The other two stories, the murder and the stranger on the island tales don’t really work. The problem is that the tales never feel fully formed. They don’t exist as living stories, rather they exist as kinds of polemics to drive the deeper meanings that Sang-il wants to get across. Within the stories events happen which never seems real. One horrific turn serves no purpose other than to cause turmoil and spark the conclusion. The revelation of who done it (the least interesting thing in the film) seems to be out of left field and just tacked on because they couldn’t not reveal who did it. Both storylines just seem to twist for the hell of it and it’s disappointing.

I like the film but I want the first two stories as their own films. 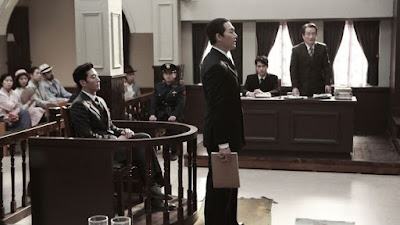 THE TOOTH AND THE NAIL was described as a kind of Perry Mason meets The Prestige by Hubert Vigilia. It’s a wonderful throwback to the murder mysteries of the 1940’s or 50’s. It’s a film you’ll want to watch on a rainy afternoon while curled up on a couch with a big bowl of popcorn.

A two part tale the film is the story of an unknown suspect for a murder at Stone Mansion. The house was found riddled with bullets and a burned up body was found in the furnace. Outside of it was a severed finger and signs of a bloody struggle. As the trial progresses we flash back to the story of a stage magician in the sticks who meets a mysterious woman. He falls in love with her once they begin to work together setting in motion the events that lead to the murder. This being the days after the Second World War the scar left by the Japanese occupation effects everything.

While not high are it is high entertainment. This is a film that grabs you and drags you along all the way to the end. Its great characters doing interesting things and making you wonder how it’s going to come out. Yea you know what bits are going to be but there are twist we don’t see coming and as a result we murmur at the screen.

This is a nifty mystery, and while directors Jung Sik and Kim Whee go out of their way to misdirect and withhold information (we don’t know who is on trial for a good chunk of the film) it’s okay because we are given characters that we like enough that we are willing to wait. Everything is so finely crafted that we want to take the ride to see how it all ties together. And despite knowing we are being messed with we don't care because we are having fun.

Watching the audience around me at the Walter Reade added to it because everyone seemed to into it. I could see them leaning forward in their seats and trying to work out how it was all going.  After the heavy lifting of RAGE, which screened before it, everyone was willing to chill for a couple of hours.

I loved this film a great deal. I want to go again because now that I know what happens it all unfold knowing how it comes out.

This film is a blast and worth a look- with popcorn
Posted by Steve Kopian at July 06, 2017