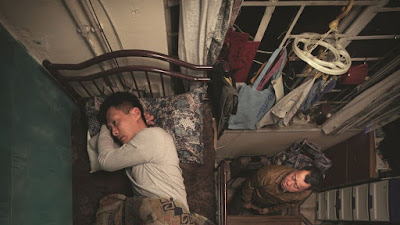 One of the best films at this years New York Asian Film Festival MAD WORLD is a must see for the stellar performances of Shawn Yue and Eric Tsang.

As the film opens Eric Tsang has been contacted by a hospital to see if he will come and get his son Shawn Yue. It seems his Yue has become bipolar and the hospital has done all it can for him. Tsang, who hasn't had much contact with him takes him in. Now sharing what amounts to a bunk bed in a closet the pair are forced to come to terms with the illness and their past.

Heartfelt and real MAD WORLD moves you. Its a stunning portrait of mental illness and the toll it takes on families and friends. HAving dealt with friends and family in various similar situation I can attest that the film gets a hell of a lot right. This is how it goes sometimes.

As good as the film is at making as feel the pain of the situation the real glory must go to Yue and Tsang who burn up the screen in two of the best performances I've seen all year. Tsang has always been one of the best actors working in the world so his magnificent performance is no real surprise. Why he hasn't come to Hollywood is a mystery since he could act pretty much everyone under the table with his understated power. Yue, who I've seen elsewhere in a few films is masterful. This is a calling card for more than the action films I'm accustomed to seeing in.

MAD WORLD plays July 12 at NYAFF when Eric Tsang will get the Lifetime Achievement Award
Posted by Steve Kopian at July 07, 2017