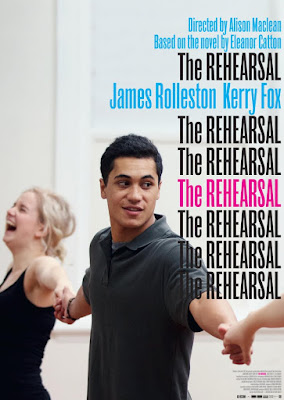 I am not a fan of  THE REHEARSAL. I saw the film last year at the New York Film Festival and I really disliked it. Never mind that the plot makes little sense or that that actor in the lead role can't act, what really bothered was the fact it hangs one couple where the girl is under aged but is completely fine with another one where the girl is even younger.

I know many people have loved the film, but for the life of me I don't know why. When I mention the problem with the under age girls they kind of scrunch up their faces, ponder it a bit and then give a non-answer such as "yea well". I find it kind of funny since many of the film's staunchest supporters are the people who normally ferret out and get upset by similar problems in other films.

If you think about the film, which some day I hope never to do again, you'll see its a gawd awful mess

Alison Maclean's THE REHEARSAL not only has all sorts of plot problems but it is also one of the most morally reprehensible films in a long time. Actually that maybe the first time I've ever said that about a film in print.

The plot of the film has a no talent actor named Stanley going off to a prestigious acting academy. Along the way he meet a girl who plays tennis. It transpires that Stanley and some fellow students use the story of the girl's older sister who had an affair with her tennis coach for their theater project. It seems that the sister is only 15. Where will this all lead?

The film has lots of problems, from a main character who isn't that good an actor (both in the film and in real life), to plot threads that go nowhere (even if this is a slice of life over a year there are threads that go nowhere that should), to worst sin of all there really are no characters just cut outs that get moved around. We know everyone by their looks and dress but not by their personality because we never really get to know anyone- we have to infer everything. There are only three “characters” and they aren’t all that great, Stanley just mopes, the head of the school is a cunt despite saying she cares (only about herself and school), and the one interesting character suddenly kills himself off camera. That's it. That's all there is. I have no idea what anyone's name is beyond Stanley.

A bigger problem is that everyone in the film , and even the film itself is kind of morally broken, or if not that at least incredibly stupid.

It begins with the idea that these nimrods would use the story of the sister of one of their girlfriends and not think there would be problem. The idea is insane. Are they that disconnected from reality and the people around them? Apparently. Is Stanley that stupid and that big an asshole that he would allow it, when he supposedly loves some one connected to it? Oh hell yea. He has to be the one of the most uncaring assholes around. More insane is the thought that the school would let them do it once they found out that Stanley was involved in with someone in the family- especially since it's for a performance that is supposed to be getting media coverage. The controversy sure to follow would wreck the school but the head of the school says nothing. Is director/writer Mclean that stupid?

Apparently. I can't imagine that any school would allow it.

The real thing that pisses me off with the film is that repeatedly condemns having sex with under aged girls- the girl who was having sex with her coach was 15 years old and everyone is upset about that. He's been arrested and is heading to jail. One of the actresses has a run in with the coach and is skeeved out by the thought of underaged sex-to the point they decide to do the show as a kind of payback. Everyone is horrified and gets upset....

... but the the trouble is the film has no problem that Stanley, who is over 18 is seually involved with the YOUNGER sister of the 15 year old. This makes her at the very least 14, possibly/probably younger (we never know her age other than she’s younger than the 15 year old).

And this is okay? No one really blinks an eye for the most part. It's also something to be celebrated at the end as Stanley and the girl walk off together... why because Stanley has finally expressed his feelings and said he loves her. Really? No it's not okay.

You can't have it both ways- though the film thinks it can. Had the film time and time again not taken the stance that older guys should be not pursuing younger women you could get away with it and I would have said nothing. But the film keeps harping on it. Clearly the film sees a problem because Stanley is warned by the head of the school in no uncertain terms to knock it off since he was seen with an under-aged girl (clearly it is a problem) and if he gets caught he will be in trouble and the school will suffer...

..which brings me back to if they were worried about that and because the teacher knew who the girl was why would she even consider allowing the performance of a piece based on the tennis teacher. It really makes no sense internally to the film.

Actually the film makes no sense internally as time frames are wonky, plot points don't hang together and details in dialog betray a sense that the filmmakers either had a longer script that ended up cut down or that they really weren't paying any attention to the realities of their movie. I kept wondering why no one caught all the plot problems unless they simply thought no one was going to be paying any attention.

This film makes so little sense in the end that I and a fellow writer who shall remain nameless got yelled at by some people in the screening because we vocalized our displeasure at the film when the end credits started.