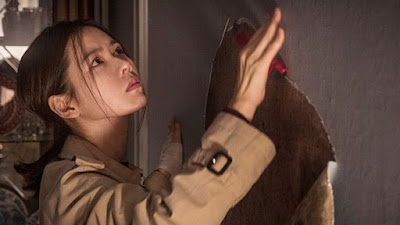 I swear to you that going into the film I had no clue that one of the writers on the film was Chan-wook Park who post people know was the mad mind behind OLD BOY. While this film isn't quite as twisted as that one it is still a kick in the ass and a punch in the face.

The plot is simple: As a politician heads into the run to election day his daughter goes missing. Most people assume that since she has been a handful that she has just run off, pissed off at her parents. However things aren't quite right answers aren't being easily found  so the politician's wife begins to dig into the case hoping to find the girl before anything bad happens. What she finds will shock her to her very core.

Despite a a few moments where things don't add up THE TRUTH BENEATH is as gripping a thriller as they come. One of the first films I saw in preparing my coverage for this year's New York Asian Film Fest, it set an impossibly high mark for everything that followed. I was blown away by not only the twists but some of the terrible things that happen. It rattled me to my core and then some. Even after seeing 45 films at the festival this is the film I always return to.

I am not going to go into details. As much as I wold love to discuss I'm going to leave the talk to you- which will follow every twist and bloody turn of the tale.

Highly recommended for thriller lovers of all sorts. The film plays Monday at the Walter Reade Theater