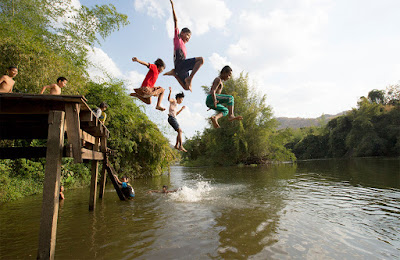 Wonderful portrait of Mother Aew and her school, Children's Village, which is located in the jungle of Thailand.

Children's Village was set up to care for underprivileged, abused or orphaned kids. The school, which is non-traditional, strives to gives students a sense of self and well being while creating a family. The students are given a voice in how things are run as well as what is taught,.The idea is that by allowing the kids to help steer things they will become more engaged with themselves, their studies and the world. Based on what we see in the film it seems to be working.

While the film is occasionally uneven, several moments seem to ave been staged for the purpose of exposition, there is a life and a truth that bleeds off the screen. Watching the film you can not help but become infected with hope for the future and a sadness that your own schooling wasn't in a place such as this.

I absolutely loved this film a great deal. I love it so much that I don't know what to say but see it.  This is absolutely one of the very best films playing at DOC NYC.

Here's another reason to attend the screening at DOC NYC:

In addition to Marvin Blunte's film, 6 WEEKS TO MOTHER'S DAY, he is collaborating with Google Expeditions to create a virtual reality (VR) field trip, where teachers and students can use Google Cardboard to be transported to Children’s Village Thailand. This will be the first ever Expedition available in both English and Thai, further solidifying Mother Aew as one of the most progressive minded teachers in the country. Special edition 6 Weeks to Mother’s Day Google Cardboards will be handed out to the audience after the DOC NYC screening on Nov. 16, and instructions will be posted on the film’s Facebook page.
Posted by Steve Kopian at November 12, 2017