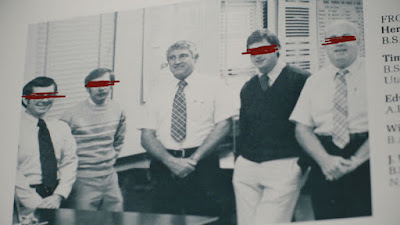 Director Paige Goldberg Tolmach's shattering WHAT HAUNTS US is nominally a look at the crimes of Eddie Fischer, a coach and beloved teacher at South Carolina’s Porter Gaud School. Fischer was serial pedophile who molested scores of kids of the years but was only brought to justice when one of his victims decided to stop the abuse. However while Tolmach is highlighting the crimes of her former teacher she is in reality pointing a finger at an unexpected co-conspirator- everyone who knew and did nothing.

Tolmach's journey really began when she began to dread getting any phone calls from her old home town. It seemed that so many of the people she knew and went to school with were killing themselves. Most of the deceased had been connected to or molested by Fischer. Needing to come to terms with what happened she began to investigate and try to get answers about what exactly happened.

In an age when there are too many of these stories and at a time when sexual harassment is front page headline news one would think that the last thing we need is another filmy such as this. What could be said that hasn't been said already?

What Tolmach has done was to make a film that upends expectations. We know early on that what is going on. We know that Fischer is a bad guy but Tolmach frames the film as a kind of memory play. Everyone is looking back and remembering and trying to figure out who knew what and when. At the same time Tolmach is clearly aiming for something outside of the perceived target. This isn't a bad guy doing bad thing but the tale of a society not doing what they should have.Tolmach has blame to lay at the feet of everyone who knew or suspected and did nothing (including it would seem herself). Its a move that keeps us watching as the uneasy feeling that we as spectators may also be guilty of something similar somewhere in our lives, claws its way up our backs and into out heads.

I was left staring at the screen.

Tolmach has made a damning film that will leave most  in the audience quietly shaken and pondering what they might have left undone.

One of the best films at DOC NYC and of 2017 as a whole WHAT HAUNTS US plays Monday at the festival and is a must see.

For ticket and more information go here.
Posted by Steve Kopian at November 10, 2017