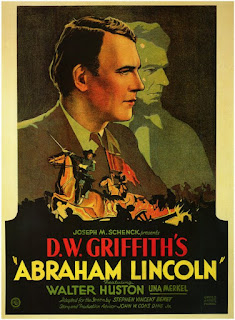 Out dated when it was made the survives at all because there is something truly bizarre about Walter Huston's lead performance (His is the only performance in a film full of non performances). He seems to think that Lincoln was a goof ball and while on some level it's a charming portrait its unlike anything I've ever seen or read in a portrait of the 16th president. (Huston's size also seems to vary from scenes to scene depending on the actors around him for a truly odd effect)

The rest of the film is a throw back to the cinema pre-Birth of a Nation, with much of the scenes arranged in odd tableaux. To be certain part of it maybe the uncertainty of early sound equipment, however the result is like watching stuffed animals in a museum.

The script is awful. It zips through Lincoln's life faster then cliff notes pausing only for romance, jokes and the odd highlight. Only one scene works, Lincoln's legendary late night walking the halls of the White House. Its a sequence that is strangely poignant. The rest of this film is like watching a bad road accident.

Even allowing for the passage of 80 years I can't believe anyone ever took this film seriously. It's a turkey
Posted by Steve Kopian at November 21, 2017