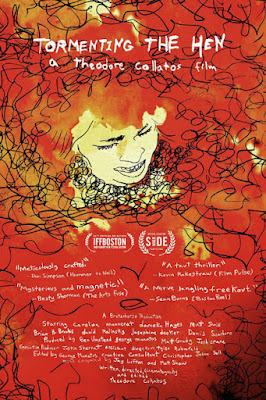 To be honest I don't know what I think of TORMENTING THE HEN. It is a film where volumes are unsaid and what is said isn't always what is meant. It is a film where the structure as unclear as the motivations of the characters. Clearly director Theodore Collatos is striving for something but I'm not sure if he achieves whatever it is he is aiming at. On the other hand it has great moments and the themes it's striving to explore are often nicely handled.

Playwright Claire leaves New York City for the Berkshires  where her new play is being produced. Traveling with Monica, her fiance, the couple is hoping to have a working vacation. However circumstances seem to conspire against them as the actors in Claire's play don't want to perform it as written and Monica is made very uncomfortable by Mutty, the son of people who own the house they are staying in. He is large and menacing and clearly has some mental issues. As outside forces put a strain on the women and their relationship begins to fracture.

More a study of a relationship than narrative the film is looking to explore the spaces between characters. What fills the silences and the things unsaid? Do we really know the people around us or do we simply know the idea of them that we have inside our own heads? What at do we mean when we say or do something and is that how other people see our actions? Director Collatos is aiming to explore some heavy questions and he has some interesting things to say about how we see and communicate with each other. It's on it's most basic level that the film works best. Unfortunately it isn't always on view.

While seeming conventional in construction it's clear from the opening credits that we aren't in "Kansas" but somewhere else. Quick clips of violence and sexual imagery intermingle with more pastoral images. One is left feeling unsure what one is seeing.  When the film started I really had no idea what the film was about since I went into the film completely blind. I simply agreed to review the film because a friend asked me to. While was not completely unaware of the film, I know Ben Umstead, one of the producers and I had run a crowdfunding appeal for the film here at Unseen Films, I had no knowledge of the plot whatsoever going in because I had been asked by a third party to review it and didn't connect the screener back to earlier conversations. Going in blind, and based on the credits, I thought this was going to be either a horror movie or thriller, however despite the use of horror movie tropes and some thriller like music the film is simply a drama of uncomfortable interactions. The film's structure is a physical representation of the theme of misdirected expectations.

I'm just not sure it works and I wasn't really sure why. I struggled with the question for several hours when I started to write the review, becoming  so tangled up in trying to deduce the cause of my feelings that I had to go to bed and pick up the review the next day.

Thinking about the film overnight I came to realize that for me the film makes one misstep in that I don’t think it fully trusts it's audience to feel what it wants us to feel. The film through opening credits, music and structure wants us to think its a thriller and be on edge. This is fine but it puts us outside the characters world. We are being clued to feel as we would toward characters who are in a thriller when they simply in a character driven drama. Things are being misrepresented so watching the film becomes kind of frustrating because the rhythm is off. We didn’t need the music and framing to pump up our emotions when the natural awkwardness of the situations between the characters is as sharp as it is. The film would have worked better just taking it straight.

Unfortunately the film is also saddled with the unwieldy character of Mutty. He is a problem for the story because in a film that is otherwise wonderfully subtle with its points (we slowly and naturally come to realize the gulf between characters) Mutty is a bull in a china shop. He is, beyond the music, the reason that we think this is all going to turn dark, since he would normally be the typical horror movie character who snaps. He keeps us feeling the film is one thing when it is not. Worse Mutty’s inability to really communicate well with the other characters gilding the lily. He is boldly painted in broad strokes and thick lines in a film that is otherwise made up of characters who are drawn with fine detail. It’s as if director Collatos needed to add extra exclamation points to a sentence that didn’t need any.

On some level I feel like I need to apologize for not being able to take the film completely on its own terms. I’m a strong believer in seeing a film divorced of hype and explanation and taking the film exactly for what is on screen. While in this case I went in no expectations because I literally knew nothing about it before it started, I've come out saying that the film should be something it isn't. It's not fair I know but in watching it I had a sense that the film itself doesn’t know what it is. I think it thinks it’s a thriller and acts that way but in behaving that way it misses the fact it has a really intriguing drama at its heart. After hours and hours of thought I think I would have loved it had it just stopped the misdirection and played it all straight.

And the weird thing is that as much as I’m bitching about the film I don’t think it’s a bad film. I certainly don’t dislike it. There are some really good performances and super exchanges that highlight the themes it’s trying to wrestle with. If they were allowed to fully flourish this would be a kick ass film. As it is I think it’s an interesting misfire.

Is it worth seeing? I would say it’s worth trying. It definitely has some killer moments. Additionally after seeing the film I read several other reviews of the film and many other writers spoke well of the film.