The Mighty Atom: The Story of Joseph Greenstein: The Most Unlikely Strongman Who Ever Lived (2017) 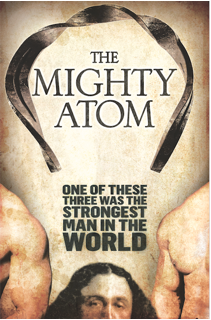 I consciously heard of "The Mighty Atom" for the first time when I either saw the film BENDING STEEL or when I did research on strong men after seeing it. The story of Joseph Greenstein, the five foot four superman impressed the hell out of me. His feets of strength haunted me so when the chance to see a full on documentary I jumped.

Joseph Greenstein was born in Poland in 1893.  A sickly child Greenstein began to try and improve himself after the death of his father. He wanted to make sure he didn't die young so he ran away from home, joined the circus and learned to take care of himself. Coming to America Greenstein ran a gas station until a chance encounter with Harry Houdini sent him back into show business.

Hitting VOD screens today THE MIGHTY ATOM is a loving portrait of the man, his family and the amazing things he did. Told through interviews with the people who knew him and those that marveled at his feats, the film gives us a warts and all portrait of the one man who may have been the strongest person who ever lived.

Adding to the amazement factor is the fact that the filmmakers have strong men today talk about what Greenstein did and even try to replicate his feats. Its a brilliant move that puts things into wonderful perspective and makes us realize just how special the Atom was.

While a great deal is left out, I would have loved details about what happened when he ran away with the circus, there is enough wonderful material to make it clear that to have more would simply overeating at a fantastic banquet.

I  love this film a great deal. It is a perfect window on a time gone by to the age when feats of strength could impress the world. Its a film I can't wait to share and see again and again.