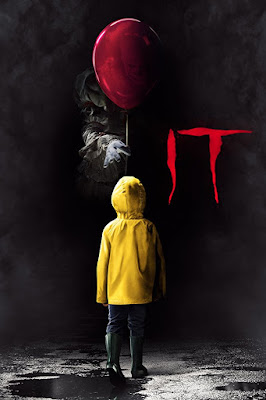 Highest grossing horror film of all time, or some such nonsense, IT has been the point of a flood or recent Stephen King adaptations. Based on the half of the King novel the success has assured that the film will get a sequel that will finish the story.

For those who don't know IT tells the story of a bunch of kids who band together to fight an evil being who loves to take the form of a clown named Pennywise. The clown has been feeding on the children of the town for decades and as it starts the feeding cycle anew the kids fight back.

I am at a loss as to why the film has taken hold to the point of cinematic stardom. While the film is in no way bad the film as a whole never truly achieves true fear. Yes the set pieces are solid and there are moments of haunting beauty but the film's pace at times feels leaden and some moments don't have the pop they should.

I think the reason the film has become one of the year's big films is because of the dislike of clowns that many people have mixed with Bill Skarsgård's instantly iconic portrayal of the evil monster. Equal to and completely different than Tim Curry's original portrayal Skarsgard career is nor assured as everyone will cast him as the next monster.

While the film is good on it's own terms the story does kind of suffer from the removal of the second half of the story. Originally told in a call and response way with the now mixing with the then the story doesn't have the resonances the novel and the TV series had. I'm left to ponder if once the second film is done if the filmmakers will attempt to put it all together as one story.