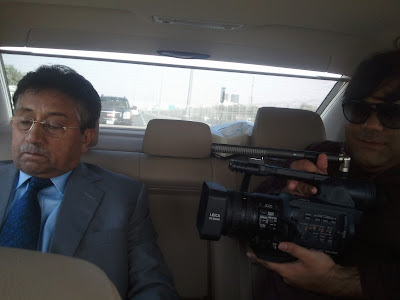 Mohammed Naqvi's eye opening film is what happens when after several coups and bad leadership in Pakistan the country begins to head toward general elections. Wanting to find the right candidate Naqvi begins to investigate the men running for office  including former leader General Pervez Musharraf who had lead the country after a coup in the 1990's and was later forced into exile.

This must see film is a crash course in the political situation in Pakistan. Naqvi nicely explains the politics of the country both then and now and makes you understand that there is a hell of a lot more to the country than the odd brief news story that we see on TV. Naqvi not only explains it but puts us into the middle of it via his interviews with pretty much everyone of important. Its an up close and personal look at a county none of us in America remotely understands.

Seemingly shot on the fly under difficult circumstances the film really gives you a sense of place and of history that no other documentary on Pakistan that I have seen has ever done. Watching the film I finally got a sense that I understood what it was all about.

Interestingly in an age when many Americans have become fed up with our way of selecting leaders this film can be seen as a reminder that, despite hiccups democracy actually can take hold in unexpected places and have unexpected results.

Insha’Allah Democracy plays Sunday and Tuesday at DOC NYC and is recommended. For tickets and more information go here.

Addendum:
In the week or so since I first saw he film it has grown in stature in my mind. It is a film that I can’t shake. Its inside look at Pakistan has haunted me. I cannot tell you how good and how important the film is. It is a film which that has changed how I see and think about the world, which is the highest praise I can give any film.

You must see this film.
Posted by Steve Kopian at November 10, 2017