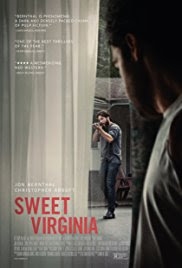 Sweet Virginia is one of the seeming increasing number of neo-noir films that are flooding the market. That’s both a pleasure and curse for the film which is a bit predictable but as comfortable as a favorite t-shirt

The plot of the film has a small town rocked by murder burglary. The police are of course baffled as are the residents in the town including the local motel owner and the widow of the deceased. As Sam deals with the aftershocks he begins to slowly put the pieces together…

Make no mistake we’ve been here before. From the infidelities, hidden secrets and strange visitors we’ve been here any number of times since the early days of movies. The plot is so familiar that if you love noir you’d be checking off details and rounding up suspects before the revelations of the film. The overly familiar nature of the plot makes this a film that is good but would have been so much better had we not been ahead of everyone on screen.

On the other hand the film is done well enough that despite reservations when I saw the film at Tribeca the film remained in my mind enough that six months later I was ready to try it again. Seeing it again away from the crush of the festival I found that the film played better. While far from perfect it’s an enjoyable film, the sort of thing you’d pick up again and again when it hits cable.
Posted by Steve Kopian at November 16, 2017