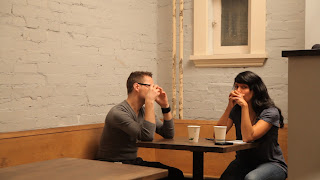 When Attiya Khan was 16 she met a boy named Steve who was 18. They were together for 2 years, and lived together. He violently abused her. 20 years later she sits down with her abuser to talk about what happened and in hopes of him taking responsibility, and getting some answers. Attiya was scared of Steve for years after leaving him, having nightmares, PTSD, bad anxiety, and now here she is able to come face to face with him and talk to him about what happened all those years ago. It takes strength. It also takes strength for Steve to agree to have their encounters filmed. She speaks openly about the abuse he inflicted on her, they visit a domestic violence counselor together (as well as apart), and go back to the apartment and high school they attended.

I don't want to say much but the film was was definitely very heavy. At the beginning of the documentary, there is a warning that it might be too upsetting for some. Some of it was hard to listen to. It was honest and raw, and I'm still thinking about it a week later. I've never seen a documentary like it, and I recommend it, but given the context it might not be for everyone.
Posted by Steve Kopian at November 21, 2017