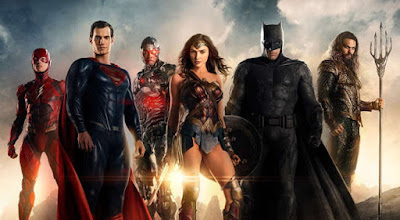 Justice League is a surprisingly good film. While I liked Suicide Squad and Batman vs Superman I was kind of iffy on the prospects of Justice League. I mean BVS and Suicide were enjoyable messes they still were messes. I was afraid that the JL was going to go horribly wrong since it was setting up three heroes as well as continuing with three others. I shouldn’t have worried since they pulled it all together.

Picking up where Batman vs Superman left off the world finds it’s on the verge of being invaded by aliens. Not only are they buzzing about various locations they are appearing in mass in order to find three magical mother boxes which can reshape matter. With Superman dead Batman and Wonder Woman know they are out gunned so they look for other potential heroes in order to help. To that end they recruit Aquaman, The Flash and Cyborg.

Playing like one of the better first issues of a superhero comic, Justice League just moves like the wind. Running under 2 hours its full of sound and fury signifying a new franchise. Characters a built (Cyborg is finally a great character), rebuilt (Superman is not a dick and is finally a cool guy), fights happen and pithy lines are spoken. It’s pure motion on both physical and character levels that drive everything forward. It’s a popcorn film for the head and the heart.

While the film isn’t perfect, the film feels like it should have been longer and there is some evidence that the film changed directorial hands, the film still manages to be wholly satisfying as it moves the characters away from the maudlin darkness of the last two team up films. It’s a film that makes me want to see what comes next because the potential for something special is there.

I really like the film a great deal (and I thought the 3D was well done).

I do want to add that I’d like to see what the original cut was supposed to be. Scenes in the trailer and talk of partially completed sequences (allegedly a post credit sequence was filmed but not finished with two Green Lanterns) make me think that the film was headed toward being interestingly different.