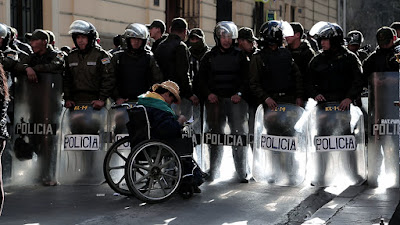 Nominated for an IDA Award for Best Short Documentary THE FIGHT tells the story of a group of disabled protesters who traveled over the Andes in Bolivia in order to fight for their right to exist. It seems the government had made no provision to help any of the people and they were largely left to fend for themselves. We watch as the protesters make their trip and prepare to engage with the police who set up lines of riot gear clad men to stop them.

Hard to critique, the film is best just seen for yourself (see below) the film highlights a great social injustice being perpetrated by the Bolivian government on it's people.

The film has resulted in some change in Bolivia for people with disabilities, and has been the subject of international media attention from CNN and The Guardian (who is hosting the film on their website). Hoever the fight isn't over  and the filmmakers are also now raising money on GoFundMe for Mickey, one of the leaders of the fight featured in the film for his medical bills for his life-saving surgery.

THE FIGHT can be viewed here
Posted by Steve Kopian at November 26, 2017