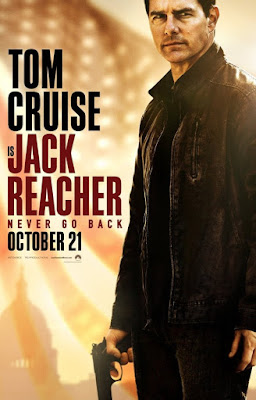 Second outing for Tom Cruise as Lee Child's hero has him helping a army investigator stay alive when evil contractors put a hit out on her life.

Pure popcorn film is full of great lines, sold action and complete nonsense as Cruise tears up the country in order to get justice and stay alive. Needlessly messy plot wise, not only are we following an all over the place contractors gone bad tale, but we also have to contend with whether Reacher as a daughter or not subplot. While it humanizes the killing machine it's a little too much for the film to support.

On the other hand the film doesn't really exist for the plot but the action and one liners and on that level the film is gangbusters.

A pure joy of a film, NEVER GO BACK is highly recommended to anyone who just wants to watch an action ballet.

Now Mr Cruise can we have some more please?
Posted by Steve Kopian at November 30, 2017