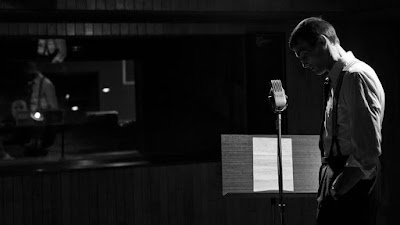 Pat Collins, best known for making documentaries, turns his attention to the life of traditional Irish singer Joe Heaney in SONG OF GRANITE, which is Ireland's entry for the Foreign Language Oscar.

Shot in glorious black and white the film feels as though we are watching life unfurls before us. Life happens. Heaney grows up and grows old before us. There is little in the way of conventional dramatic scenes, this is more moments of a life and songs sung with the the occasional  voice over to fill in some details.

While gorgeous to look at with some powerful musical moments SONG OF GRANITE is not going to be for all audiences. While most assuredly an Oscar bait film and something certain to be a critical darling the structure of the film and its life as lived pacing is going to split audiences. Those willing to go with the film and it's deliberate pacing will be rewarded with a film that will make them feel as if they have gotten to walk with Heaney through his life. On the other hand if audiences want more than beautiful vistas and traditional Irish songs then they are going to be sleeping in their seats.

Personally I am somewhere in the middle on the film. While I can and do admire the craft and artistry that went into making the film my attention drifted off and about the time that Heaney had begun to perform in public I was fighting to stay awake. I simply never connected with anything on screen other than the cinematography.

SONG OF GRANITE opens in US theaters this Wednesday.
Posted by Steve Kopian at November 13, 2017