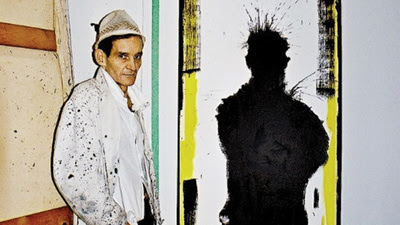 Richard Hambleton was once considered the very top of the art world in the late 70’s and early 1980’s above even poster boys Keith Harring and Basquiat. His Shadow men portraits across New York were the precursor to Banksy. Hambleton was all set to become a superstar- but his erratic behavior intensified by his drug addiction brought it all crashing down.

Uneven portrait of Hambleton is a mix of glorious art (I love his shadows and landscapes) and frustrating madness. The problem is that Hambleton for all is talent is an a prickly pear of a person (and that’s being kind). An SOB who follows his muse wherever it leads he runs rough shod over anyone who comes near him- all the while turning out art of the sort that makes you think he is divinely inspired. However he’s such a pain that you want to hit him.

Amazingly the film seems to be aiming toward an ending that says that Hambleton has died, but despite being an addict and having health problems (including a cancer that is eating away his face) he is still chugging along.

Give director Oren Jacoby points for making a film about a surly son of a bitch but take a couple back for not making him likable enough that you really want to spend time with him. While I like that there is no tacked on triumph at the end I’d have liked it more if we had just had a slide show of his art.
Posted by Steve Kopian at November 27, 2017