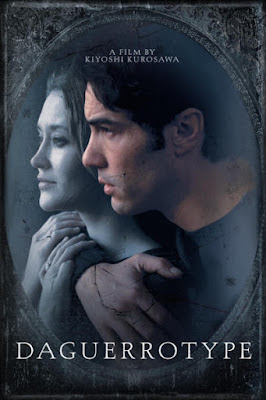 Kiyoshi Kurosawa's first film outside of Japan is haunting film about love and loss and photography.

A youngman is hired by a photographer who shoots everything in antique style. He is also working on a project involving life size daugerrotypes of his daughter.

I really don't know what to say. This is a beautiful delicate film that the less you know the better it is. Most certainly a ghost story, the photographer is haunted by the ghost of his wife - but I dare not say more than that. The film gently, and not so gently flips over itself several times in the course of it's run time.

I really like the film a great deal and while I have a great deal to say this is too early in the films theatrical run to discuss it. (And I need room to ponder it's charms)

Highly recommended- though don't let anyone tell you too much about it..
Posted by Steve Kopian at November 07, 2017