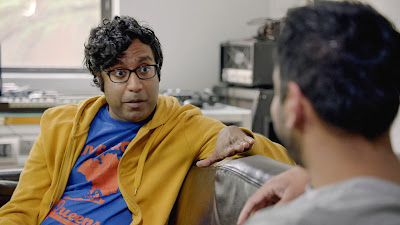 Hari Kondabolu confronts the stereotype of South Asians as represented by the character of Apu on the Simpsons, a character which has bothered him all for all the years the show has been on the air.

Kondabolu has made a very good look at the question of representation in the media and the problems that stereotypes can cause for the group being mocked. Speaking from experience,  Kondabolu lays out the troubles he has faced over the years as a result of the character and the shows popularity. While primarily addressing the question of South Asian stereotypes the film also addresses to the larger question of ethnic jokes and representations in the media making it a film one can't easily walk away from. It is a film that forces us to consider the very nature of comedy.

One of the things I admire is that Kondabolu doesn't sy away from the fact that,Apu aside he genuinely likes The Simpsons. While some of the people he speaks to doesn't like the film because of the character, Kondabolu finds that hating the show isn't so easy since he knows that the film was important to shaping who he is

While I like the film a great deal I hate that the film was made for TV. Running a fleeting 49 minutes the  film feels rushed, even if it covers a great deal of ground thoughtfully. The film also has the current TV doc sensibility which is talk in soundbites and be splashy making the film seem less deep than it is.

While perhaps it isn't the definitive statement on stereotypes in the media THE PROBLEM WITH APU is an excellent place to begin the conversation.