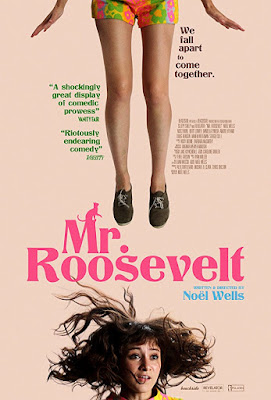 Struggling stand up comic rushes home to Texas in order to be there when her cat dies. Once there the she tries to reconnect with her old friends while staying at her ex's home where he lives with his new girlfriend.

Noel Wells MR ROOSEVELT is either going to thrill you or annoy you. An occasionally funny film, how you react to it is going to depend upon how you react to Wells lead character Emily. Emily is a walking collection of character ticks and low self esteem that one is forced to wonder how she has managed to get anywhere in life. While the traits would make for an interesting background character its hard to take in a lead because there doesn't really seem to be a real person attached to them. I was more annoyed than amused and it made it hard for me to root for our heroine. (She's the perfect character for a five minute sketch not a 90 minute film)

Despite its problems the film does produce some laughs.While decidedly not my taste in a comedy, it's a little too inde hip for my tastes there are some very funny one liners that may seem funnier because much of this is rather flat.  There are enough laughs to make the film worth trying but in the end this maybe best for fans of Ms Wells.