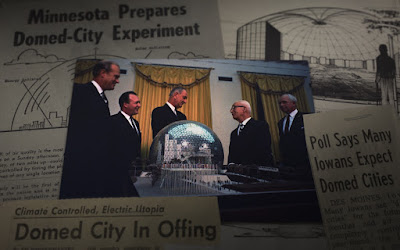 Chad Freidrichs' film THE EXPERIMENTAL CITY is a stunning piece of work A visually and aurally intriguing film it i part essay, part historical document and a true work of art.

The film is a recounting of the life and work of Athelstan Spilhaus was trained as an oceanographer and geophysicist and all around genius who strove to to make the world a better place. Spilhaus  put forward his ideas in the comic Our New Age which ran for almost two decades where he told of the wonders of science and the promise of the future. Spilhaus realized that the way we lived was not sustainable and thought that in order to help bring change that people should build an experimental city where new ways of living could be explored. Some people loved the idea, others were terrified by it.

A mix of new interviews, old recordings (we hear Spilhaus' own words in tape recordings), recreations and archival footage we are sent down the rabbit hole of a world than might have been. Cut together in such a way as to create a unique head space THE EXPERIMENTAL CITY is very much a film unto itself. The closest thing I could compare it to is the wonderful THE WORLD OF TOMORROW  from 1984 which was made up of films from the 1939-40 World's Fair in New York. In that film Jason Robards narrates events as if they are a memory.

Here the present day interview sections keep us rooted in the present while the film seems to drift back in time thanks to the deft handling of the archival material. The result in both films is a kind of wonderful dislocation where we feel as though we are reliving a memory of an event we've never experienced. That may sound bizarre but it's true since as the film plays out we can't help but feel we've stepped back in time.

What is intriguing about the film is the fact that Spilhaus clearly could see the future. Many of the the things he was trying to do urban planners are now trying to do. Additionally he knew many of the dangers we'd face as revealed in his comic where it talks about pollution changing the climate.

Watching the film I was moved. Onone level by the nostalgia for something I never knew about and another by the loss of things that might have been.

I love this film a great deal. Never mind that the film is informative, more importantly it does what all good films do and that is transport the viewer to somewhere else, another reality that only the movies can create. And in this case this is true, we are back in time in a world that never existed despite the best efforts of all those involved.

THE EXPERIMENTAL CITY is one of the gems of DOC NYC and a must see when it plays Thursday night.
Posted by Steve Kopian at November 13, 2017