Gentle Night (2017) is in contention for an Oscar nomination 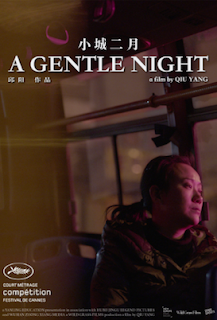 With this film, Qiu Yang became the first Chinese filmmaker to win the Cannes Palme d’Or for best short film. Appreciative festival officials also claim he gave Cannes’ shortest acceptance speech ever: “****ing amazing.” His characters do not have a great deal to say either, but the film is still quite eloquent. Cai Zhuo might be stoic by nature, but she won’t sit quietly waiting for confirmation of the grimmest news a parent can receive in Qiu’s short film, A Gentle Night (trailer here), which screens as part of Shorts Program 1 during the 55th New York Film Festival.

Cai’s thirteen-year-old daughter Linlin never came home from school. She is not the sort of girl to run away from home, not that the cop handling their missing person report believes it or cares very much. He tells Cai and her less concerned husband to come back tomorrow, when the trail is cooler, but to bring her teacher with them. Of course, the pedagogue does not want to get involved. Feeling desperate and depressed, Cai starts walking the streets of their neighborhood, unsure whether it would be good or bad news if she discovers a clue to Linlin’s fate.

Loosely inspired by a real child disappearance in Changzhou, Gentle shares common themes with Qiu’s previous short film, Under the Sun. Both critique the “don’t get involved, mind your own business” attitudes prevalent in a consumerist Mainland culture increasingly divorced from traditional Chinese values. Whereas Sun depicts the grubby, exploitative behavior that gives rise to such sentiments, Night clearly establishes the resulting human cost.

Throughout Night, Cai is profoundly alone, like nobody would ever want to be. Li Shuxian’s performance might be quiet and taciturn, but it emotionally devastating just the same. Frankly, Li does not need many words to communicate her fundamental truth, over and over again.

As he did in Sun, Qiu and his cinematographer Constanze Schmitt often frame the characters at oblique angles, through open doorways and windows. Yet, instead of distancing viewers, it heightens the sensation of our eavesdropping on excruciatingly private moments.

They also perfectly capture a sense of eerie stillness of city life during the late night hours. Initially, the title sounds ironic, yet long dark nights of the soul are often hushed and placid for those not sharing in the crisis. Qiu depicts contemporary Chinese society in cold, unfeeling terms, but his film is deeply humanistic. Very highly recommended
Posted by Steve Kopian at November 28, 2017