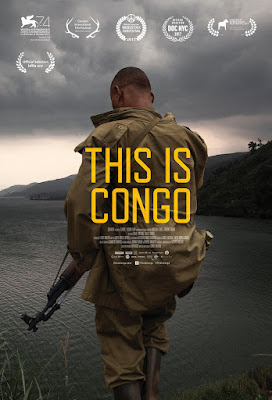 Daniel McCabe's THIS IS CONGO is a shattering look at Congo and how it ended up in the middle of a seeming perpetual war. It is a documentary filled with the sadness that only a deep understanding of a situation can bring.

McCabe's masterful film seems to be very much what the title implies, a portrait of a country. With interviews with people from across the country and in various walks of life the film gives us a real sense of who the people of the country are. Additionally McCabe fills every frame with absolute breathtaking images that place us firmly with in the countries borders. From lovely picturesque vistas to over flowing toilets we see everything there is to see about Congo and as a result we come to understand more fully than simply hearing words.

Daniel McCabe need's be applauded. He has made a brilliant thoughtful film that gives us what we need to know from all sides. He does not give us histrionic people yelling their point of view but people who are in the country and are able to explain simply and succinctly what exactly is going on with the country. Rarely has any film I've ever run across had such a carefully selected group of talking heads. Best of all while McCabe decidedly has a point of view concerning the country he is smart enough not to wear his heart on his sleeve and lets us come around to his way of thinking.

The film is a masterpiece.

THIS IS CONGO has snuck up and bit me on the ass. Its one of those rare films where I didn't realize how good the film was until a day or so after seeing the film. As per my festival routine I watched the film, made some notes and when the film was done I wrote a review. I left a few things out and I knew I'd have to go back and tweak it. The funny thing is that a few hours later I found I couldn't stop thinking about the film. In replaying the film I couldn't shake the craft of the film that quietly snuck up on me. I eventually went back to the review I had prepared and tossed it out because  it didn't quite tell you how gripping and important this film is.

One of the things that I didn't immediately catch was how the film is about more than just Congo. Yes, the film talks about all of the countries that crisscrossed through it over the centuries, but what is playing out in the country is a warning for not only other countries where big business and outside political interests have their hands rooting around, but also countries like America where divisions are fragmenting society.

I am in awe of this film and I know that I need another viewing to fully grasp everything that McCabe presents to us on every level.

If you can you must see this film when it plays this weekend at DOC NYC because it will alter how you see the world. 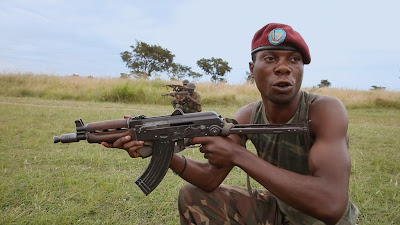