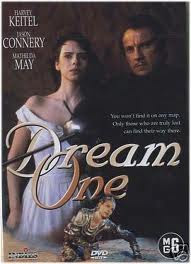 It too me several goes to get all the way through this film, but after two or three years I've finally done it. Granted the pace is slow, but this thing is so odd its hard to watch.

The device that gets things moving is that Nemo, his parents having gone off to the opera, asks his butler to tell him a story with all a great many unrelated characters. Before the story is told, Nemo, dressed like Winsor McKay's creation, wanders into to the story. The plot has Nemo, take an elevator to a beach somewhere. There the Nautilus (Captain Nemo) has been beached, a teen boy runs about with a white gorilla (his toy). Alice (from Wonderland) washes ashore and Zorro shows up. Aliens land. Nemo grows into Jason Connery so he can woo Alice...And I'm forgetting a ton of stuff.

The sets and effects are cheap and the performances uneven, but where else do you get to see Harvey Keitel as Zorro?

I have no idea how to describe, never mind rate this film. Its slow and dull at times, but its so off the wall and dream like in its plotting that you continue to watch. Some of it is profound, some of it is stupid.

If you like cinema obscurities search this bad boy out since its never played in the US to the best of knowledge, and other than the bootleg market it probably never will.

I have no idea what to think of this other than the film still dances around my brain even though other better films have been forgotten.
Posted by Steve Kopian at August 23, 2011